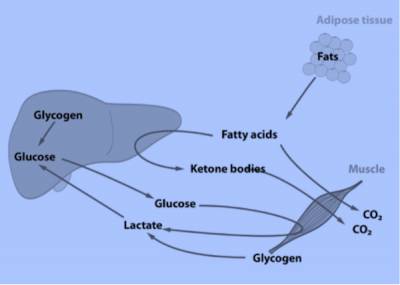 The current dietary recommendations suggest that our diet should be broken up into proportions of 50% carbohydrates, 30% fats and 20% proteins.

An interesting Collaroy to this break up is that the various cells of the body do not all partition food as per this recommendation. There are some cells that prefer to use fats or carbohydrates exclusively while others are so specific that they require different combinations.
Skeletal Muscle
Our skeletal muscle cells that are responsible for all human movement prefer to use fats as they main source of fuel at rest. These cells only use glucose when insulin levels rise and the increased blood sugar needs to neutralised and stored as glycogen or fat.
During any movement at intensities less than 60% of our maximum effort our body will use fats as fuel. Above 60% of maximum effort our muscles begin to use glucose and as the intensity increases glucose use will become more dominant.
As the intensity of our effort increases, the glucose that is mustered for use is broken down in the absence of oxygen causing an increase in lactic acid. This would indicate that our effort has now moved from an aerobic activity to an anaerobic activity or a combination of both.
We know that an increase in lactic acid is often blamed for the increase in fatigue.
The lactate component is sent to the liver where it can be reconverted back to glucose while the hydrogen ion component is the culprit that changes the acid concentration of our bodily fluids resulting in a breakdown of other cell functions throughout our body.
The Heart
The heart prefers to use fat when you are not moving intensely. It is a rare occasion when the heart uses glucose (carbohydrates) as its main fuel source.
During high intensity movement a healthy heart will pick up the lactate from the lactic acid produced throughout the body to produce energy to maintain its contractility. In fact, the heart will prefer to use the lactate rather than glucose during high intensity movement. It is ironic that the heart would prefer to use its by-product rather than the main carbohydrate component.
The Liver
The liver is an important player in the storing, making and release of glucose when required. When carbohydrate levels are low the liver collects and secretes fatty acids while forming Ketones as well as making and releasing a number of important blood proteins. The liver is a key organ that is responsible for many important functions while predominately using fats as its key source of fuel. The fat needed for this function comes from fatty acids released from adipocytes (fat cells) or from making fat from stored carbohydrates.
The Brain
The brain is most selfish organ in the body. It must be fed first and has preference over the other organs. To produce energy it can burn carbohydrate, fats or Ketones depending on the environment.
The brain weighs approximately 1.5 kilograms and can use up to approximately 600 Kcalories per day! This is way more than any other organ in the body. The extensive blood supply to the brain is crucial to producing this amount of energy as well as maintaining its optimal temperature.
It is true that the brain, based on our dietary recommendations, is very dependent on carbohydrates for its fuel. It doesn’t have any reserve of glycogen as the muscle does so when blood sugar levels are low initially there is an increase in heart rate, hunger, tremor and fatigue.
Ketones
The brain is very well placed to use ketones as it has many fatty membranes and myelin sheaths that surround the cells and nerves. The brain also contains numerous mitochondria, which are also very capable of metabolizing ketones or fatty acids. The liver through the oxidation of fatty acids produces ketones.
As a consequence there is an increase in the release of adrenaline from the adrenal glands that controls the breakdown of any glycogen in the liver as well as the formation of any glucose from any circulating lactate.
In the event that carbohydrate levels are low (between 200-600 Kcalories per day) or reduced by intense exercise, the liver looks for another source of fuel for the brain. It chooses to convert fatty acids to ketones.
An increase in ketones for energy for the brain occurs in low carbohydrate environments and after or during intense exercise. Ketones concentration between 1-3 millimolar (nM) is within a healthy normal range.
Some dietary recommendations state categorically that the brain is a carbohydrate dependent organ.
This only appears to be the case when we are on a high carbohydrate diet. This would perhaps challenge the notion that nutritional ketosis (using ketones rather than carbohydrates) is counter productive for the brain, when in fact it could be very productive given the significant amount of fat stored within the body.
A process that encourages the brain to use ketones and other organs to use fatty acids rather than glucose could potentially have very beneficial effects in weight loss and general health.
The question is now:
“Given that the body’ s reserve of carbohydrates is limited (up to approximately 2,000 kcalories) and the fat reserves extensive (approximately 80,000 Kcalories) could a keto-adapted eating plan (lower carbohydrate, more good fat and moderate protein eating plan) allow our body to burn more fat as a fuel for the majority of our bodily functions without impairing any brain function?”
Is it time for the healthy food pyramid to be challenged as our best recommendation for optimum health given that the partitioning of the macro nutrients doesn’t always match the body’s energy requirements?
Albert Einstein once said: “that the definition of insanity was to continually do the same thing over and over again and expect a different result each time”.
We might be getting to that stage….