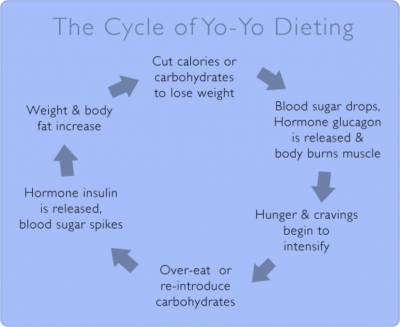 At any one time most people we know are either thinking about losing weight, are currently on a diet or have just broken their diet and putting the weight back on.  There is at any one time approximately 55% of women and 39% of men in the general population always trying to lose weight. Two thirds of the US population is now classified as overweight or obese. Of those people who are obese, 65% of men and 68% of women are trying to lose weight.

The reality is the majority of those people trying to lose weight today will sadly regain that weight within a short period of time. They might go though repeated weight loss cycles where they will lose weight and over time will put that weight back on again.
It has been reported that 18%-34% men and 20%-55% of women are currently weight cycling, which would indicate that long-term weight loss is rare.
Weight Cycling Defined
Weight cycling is defined as an intentional weight loss of 4.5 kilograms (approximately 10 lbs) followed by a regain of this weight at least three times.
In Finland 7% of men and 10% of women are serial weight cyclers, while 11% of men and 19% of women are mild weight cyclers. This indicates that 18% of all men and 30% of women have experienced some degree of weight cycling. It is likely that these numbers would be greater in the some of the more obese nations. It’s not just the overweight or obese that weight cycle. In Denmark 25% of underweight and 38% of normal weight people reported at least one weight loss attempt in their lives.
The biggest group where weight cycling is more prevalent is in the younger age groups particularly young women, mainly due to the increase in overweight or obesity in children and adolescents as well as the unhealthy obsession on thinness.
The probability of weight regains increases most dramatically in the first week of relapse following the weight loss. This is possibly due to caloric restricted diets causing an increased drive to eat. The increased drive to eat combined with a reduced ability to utilise fats encourages rapid weight gain.
Another study reported that 55% of overweight women who lost 10% of their body weight regained the weight over a 4 years period. In support of weight regain, 95% of women and 93% of men who lost on average 5% of their body weight were reported to have regained their weight within 9 years.
Collectively with all the studies initial weight loss is possible but the maintenance of the weight loss appears very unlikely and extremely difficult. The type of diet that most subjects were predominately treated with included a reduced caloric eating plan based on the healthy food pyramid (high carbohydrate diet, low fat and moderate protein).
Who is most at risk?
The most significant weight regain from weight cycling has been found in obese women, young women and middle aged women.
It is also important to realise that a greater weight gain is associated with an increase in risk factors for hypertension, diabetes, cardiovascular disease and some types of cancer.
It is possible that weight cycling can change body composition by reducing lean body mass and increasing total body fat and visceral fat.
In weight cycling, women have presented with a greater amount of total body fat and an increase in waist to hip circumference.
In particular, obese women who have weight cycled have an increased distribution of fat in the abdominal region while in non-obese women a greater waist to hip ratio was reported. In any case it appears an increase in weight regain can occur with repeated weigh cycling.
If weight loss programs are not sustainable for the long term and there are no behavioural strategies imbedded then the weight loss journey can so easily be sabotaged.
Another question that arises is whether weight cycling can be more detrimental by adding to the current disease risk than simply remaining obese or overweight…….
The emphasis should be on…
Once the weight is lost the real test comes in keeping it off…… Dr Paul Batman