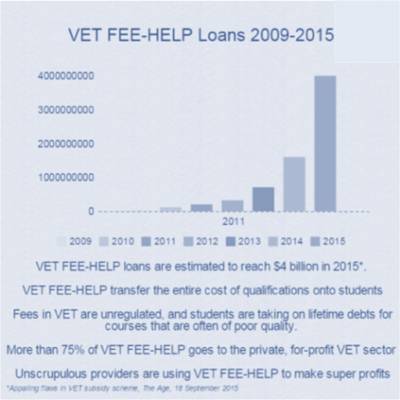 If you are thinking of enrolling in a Diploma course that is VET FEE Help funded you need to be aware of the current government investigations into rorting and profiteering by some unethical education training providers.
If you do not do your “due diligence” into your course provider and the course of your choice you may end up with a mounting debt that you will never be able to pay back. VET Fee-Help is a HECS-style scheme that covers the costs of Diploma courses.  Upon your enrolment with these education course providers and once your loan has been approved the course fee goes straight to your training provider’s account, with you repaying it to the Government through tax once your income exceeds approximately $54,000 a year.
Unlike HECS, which covers highly regulated university fees, training providers can charge whatever they want for their vocational courses. In recent years, escalating numbers of VET FEE Help student borrowers and a tripling of average course fees has sent these loaned amounts skyrocketing.
Victorian Skills Minister Steve Herbert said profiteering, rorting and mounting debt under the VET FEE Help federally funded scheme were torpedoing attempts to get vocational education and training back on track. He said loans for VET Fee-Help-backed diplomas have reached as high as $30,000 and that “$5,000-$10,000 is probably the right range of course fees for a diploma.”
Bill Shorten has also warned that the private education training sector in Australia is “in crisis”. The Opposition leader warned that vulnerable students were being “ripped off” with course fees under the VET FEE Help scheme.
Across all fields, the average tuition fee for a vocational training Diploma courses sponsored by VET FEE Help has tripled from $4814 to on average $12,308 in three years according to data from the Education Department.
Some private training providers have profiteered at public expense, tripling tuition fees in three years and lumping taxpayers with a ballooning $3 billion bill for student loans. The training industry has stated that it could not justify these price rises, and demanded the government regulate tuition fees to prevent any further rorting of the scheme.
Outrageous Course/Tuition Fees
Official data reveals the average tuition fee for a Diploma of Information Technology from some private education course providers has soared from $2779 in 2011 to $18,735 in 2014.  Some private education providers are now charging students an average of $15,493 for a Diploma of Business Management that cost $4,623 in 2011.
Business courses, including Diplomas in Hair Salon Management and Training for “Fitness Business Professionals”, now account for half the $1.7bn students borrowed for vocational training courses in 2014.
Offering Incentives
In April 2015, the Federal Government banned private education training providers from offering cash, laptops or other incentives to sign up for vocational courses. A recent inquiry found that some training providers have continued to use hard-sell tactics and smart phones or tablets as inducements to enrol in courses. For example: Elderly women at a bible group meeting in a Sydney shopping centre were given laptops to sign up to a “free” Diploma in Community Services. It further reported elderly migrants in Sydney were offered a free computer or tablet, or $1000 cash, to take out a VET Fee-Help loan to enrol in “computer classes” with a large training provider in Granville and another in Parramatta.

The report criticized the quality of some Diploma courses lasting just two weeks, and recommends minimum hours be imposed.

Victorian Skills Minister Steve Herbert has said, “Since we opened up the training system to greater competition, a lack of quality control and regulatory oversight has seen hundreds of millions of dollars squandered, employer confidence decline and student satisfaction collapse”.
Cost to the Tax Payer

According to estimates, up to $1.94bn was loaned during 2013 and 2014 to students who did not or will not complete their courses and on current trends, a further $3.47bn could have been loaned by the end of 2015 to people who will not qualify. In some colleges, only 1 per cent of students who qualified for VET FEE Help loans went on to finish their courses.
Federal Education Department data suggests almost all eligible students now take out loans for Diploma courses, with the take-up rate rising from 84 per cent in 2011 to 96 per cent last year.
An Education Department report recently released says the number of VET FEE-HELP loans doubled in 2014 to more than 200,000, raising overall payments from about $700 million to $1.75 billion. The Senate committee reports say sums like this had sparked a “provider-led feeding frenzy”. It found that VET FEE-HELP reforms had frequently been disregarded and in some cases abused.
Fees in the VET sector remain completely unregulated, in total contrast to HECS fees for universities. Some of the most vulnerable students have incurred debts of tens of thousands of dollars for worthless qualifications. At the moment regulators appear overwhelmed and apparently do not have the capacity or resources to enforce the regulatory standards.
Six of the top 10 organizations running Australian private colleges “” which together received more than $620 million in government-funded student loans last year “” are under regulatory scrutiny or have been accused of questionable quality or marketing practices.  The governing body ASQA would not say whether the five colleges still under scrutiny had so far been found non-compliant. But the audit also targeted 15 other private colleges and found that nine of them had initially failed to comply with standards. ASQA has since moved to cancel the registration of one of them.
Students from these colleges were charged hefty course fees. For example a six-month Diploma of Business cost $13,990, while the same course at TAFE Queensland costs $4,900. One of the student brokerage companies has also been accused of signing up an intellectually disabled student to a training course outside Centrelink.

Fitness Professionals Beware!!
In the fitness industry there are some training providers who are now advertising entry-level Diploma courses in Fitness that are VET FEE Help funded. They imply that to enter the fitness industry as a practicing professional that the Diploma is the qualification required and most sought after. The truth is that to be registered as a Personal Trainer, which is the highest level of registration with the peak body Fitness Australia, a Certificate III in Fitness and Certificate IV in Fitness are the registration requirements, not a Diploma.
There is no need to enrol in one of these expensive Diplomas that qualify for VET FEE Help at a cost in excess of $15,000 when the entry level requirement by the fitness industry is a Certificate III and Certificate IV in Fitness which should cost no more than $4,000.  It makes little sense to enrol in a Diploma in an area of fitness where there is no vocational outcome and at a cost that is ridiculously in excess of the legitimate industry entry-level course costs.
For your own benefit be vigilant by checking your course costs and comparing them to other course providers and ask your education training provider is there an interest free 12 months period over which you could pay off your course fee.  In the long term you will pay only a fraction of the VET FEE Help course fees that are currently being asked. Remember the quality of VET course you enrol in is not based on inflated course tuition fees or celebratory endorsements.
* Australian College – Fitness charges only $2,900 for a nationally accredited combined Certificate III in Fitness and Certificate IV in Fitness and $2,675 for the Diploma of Leadership and Management (Fitness Entrepreneur). Australian College also offers a 12 months interest free period to pay off your course fees and does not require you to apply for a VET FEE Help student loan.
Dr Paul Batman
Australian College
References:

Top vocational college AIPE may be shut down

Privatisation turned vocational education into a den of shonks and shysters

What is VET FEE-Help? The information people really need to know!