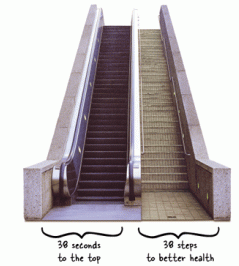 On the way to work today or at the shopping mall you will be confronted with a choice… to take the stairs or the escalator or the elevator…
We know that we should take the stairs because fitness professionals tell us that we should be more active and less sedentary…. so what will you do?
In the USA it has been estimated that there are over 700,000 elevators and 350,000 escalators in use daily. Each day there are over 320,000,000 elevator rides and 240,000,000 escalator rides taken by people in preference to taking the stairs.
Signage Effects
An attempt to increase stair climbing was first studied in the early 1980s at railway stations. One study reported 11% of people used the stairs before any signs were displayed to encourage people in talking the steps. After signs were placed at key locations there was an increase to 18-19% who began using the stairs. The signs either expressed positive health benefits or weight loss.
The weight loss signs encouraged more stair takers that the healthy sign. This showed that to increase the use of stairs a tailored message is important for a change to be made.
When the signs were withdrawn people still used the stairs but eventually went back to baseline levels after three months. When the signs were put up again it was not as effective as the first time. This shows that the message to use the stairs must continually be reinforced. The majority of research reports that it is not unreasonable to expect a 50% increase in stair usage with some sort of prompting.
Who makes the commitment?
Females tend to respond better than males when using the stairs except females who wear high heel shoes. Older adults (40 years+) are generally more likely to use the stairs while obese people did not take the stairs as often.
The Environment
The environment that the stairs are located within can have an affect on stair usage. The majority of stairwells are not very inviting with unpainted walls and floors as well as grubby appearances that don’t encourage people to use them. Greater success has been found in renovated stairwells and buildings as well as piped music to make it a more pleasant environment. Success has also been reported with messages/signs of reinforcement at each level of the stairwell.
Stairs that are located close to escalators are used more frequently than if located in isolation. Stair usage is often not encouraged by building and occupational health and safety regulations.
Commuter traffic also makes a difference in the use of stairs. Low commuter traffic encourages more use of the escalator but as foot traffic increases people tend to use the stairs more.
From a health perspective if people are encouraged to accumulate several 2 minutes bouts of stair climbing per day all cause health risk factors can be reduced after only 7 weeks. Males in particular who incorporated stair climbing into their daily life significantly improved their health profile.
If stair climbing is performed for only 11-12 minutes per day there can be an improvement in aerobic fitness and a reduction in the bad LDL cholesterol. If a weight stable man of 80 kilos (all things equal) climbed two flights of stairs daily he would lose 2.7 kilos per year.
Given the sedentary environment that we live in we need to look for opportunities to burn a little more energy each day, e.g. 100Kcals. This could be a small step towards some weight loss.
We should regard using the stairs daily as an opportunity to move more rather than as an inconvenience

So today make a positive change in your health and use the stairs!!