It has been reported that up to 20% of the Australians over 20 years of age have metabolic syndrome defined as an increase in abdominal obesity, glucose intolerance, increased fat in the blood, hypertension and high blood pressure and insulin resistance similarly seen in diabetes. Prolonged TV watching has been associated with the reduced activity of a special transporter whose job it is to transport any glucose from the blood into the muscle. If the enzyme malfunctions the result is an increase in the amount of sugar in the blood and could potentially lead to diabetes or other metabolic conditions.
The level of cardiovascular risk in children has increased dramatically over the past 20 years, which can lead to an increased risk in later life. Previously it was suggested that diet and lack of exercise were the key determinants of this epidemic. More recently researchers have focused on sedentary behavior and prolonged TV watching as a possible cause. Significant research has now shown there to be a strong association between TV watching, sedentary behavior and increased cardiovascular risk in adolescents.
Adolescents have been accused of substituting movement with more sedentary behavior such as TV watching, gaming, computer use, social networking, sitting to and from school, sitting at lunch time, sitting at dinner etc. Prolonged sitting while watching TV has been linked to obesity, metabolic syndrome. A second influence that is associated with TV watching is the increased opportunity for snacking, increased consumption of energy dense foods, decreased consumption of fruit and vegetables and general increase in energy intake.
In addition to TV watching gaming is rapidly becoming a family activity. In a study reported by Bond University in Australia a survey or 1252 families revealed that 95% of those households with children under 18 years of age had at least one gaming device with more than 80% of parents admitting to playing video games. 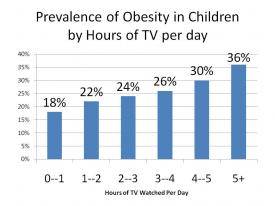