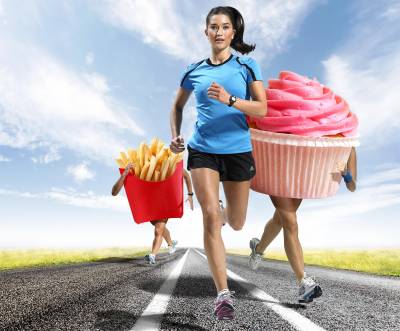 The benefits of physical activity have been extensively reported in preventing chronic diseases. Physical activity is also an important intervention in weight loss or weight maintenance. Popular weight loss TV shows highlight the importance of high intensity exercise as a main contributor to the weight loss achieved by the contestants. The truth is that exercise without some eating changes might only marginally promote long term weight loss….. but why?

One reason given is the possibility of an accompanying increase in appetite as a compensatory response to the energy expenditure in those that only use exercise as their preferred weight loss prescription. In studies conducted on overweight/obese men it was found that there was a decrease in appetite after moderately to vigorous exercise of 30-90 minutes. In lower intensity activities appetite appeared to remain the same irrespective of whether the men participated in brisk walking, running or cycling.

With the recent discovery of gut peptides involved in appetite regulation a different picture is now emerging. The reasoning is that ghrelin and other gut peptides could possibly regulate food intake for as long as 24 hours post exercise and might not be controlled by body fat stores. Ghrelin is released by the cells in the stomach and generally peaks during fasting increasing appetite and drops after eating and is now thought to be part of appetite control.

What happens to Ghrelin after different types of physical activity if performed at the same energy expenditure?

It appears that ghrelin can increase after running but remains the same after walking in overweight subjects. This could be explained by the greater intensity and energy expenditure in running compared to walking causing an increase in post exercise appetite. When overweight walkers are given the opportunity to eat post walking bout they are more likely to eat less but eat food higher in fat and protein in their subsequent meals.

In overweight women there is a reported increased release of Ghrelin and a lower insulin response post exercise both of which can increase appetite. In overweight men Ghrelin levels is generally much lower indicating that there is apparently a gender difference in the way that exercise affects appetite.

The implication for this anomaly between genders is that overweight women potentially have limited success in intense exercise induced weight loss generally resulting in no change in post exercise fat oxidation. One of the key reasons why overweight women increase their post exercise energy intake is the critical relationship between energy balance and reproductive function. Energy restriction or energy deficiency can lead to changes in Ovulatory cycles and menstruation cycles.

Another explanation for the gender differences in post exercise energy intake could be the generally lower fitness levels and higher body fat levels presented by overweight women. This information might go to some length to explain why some overweight women have difficulty in reducing body fat after intense exercise.

It is now apparent that overweight men and overweight women differ in their response to weight loss programs that only stress intense exercise without some form of dietary regulation.

We have been told conclusively that high intensity exercise will increase the energy deficit leading to a reduced energy intake and possibly weight loss. Ironically in overweight women, intense exercise can increase energy intake post exercise and is almost entirely compensated for during the remainder of the exercise bout day.

In lower intensity exercise where energy expenditure is lower there is reportedly no accompanying increase in energy intake back to pre-exercise levels in either gender.

Could it be that lower intensity physical activity over the course of a 24 hour day performed by overweight women can induce a greater energy deficit without a concomitant increase in energy intake?

Alternatively, increased lower intensity levels of “Activities of Daily Living” over a woman’s waking hours might even be more effective for long term weight loss.